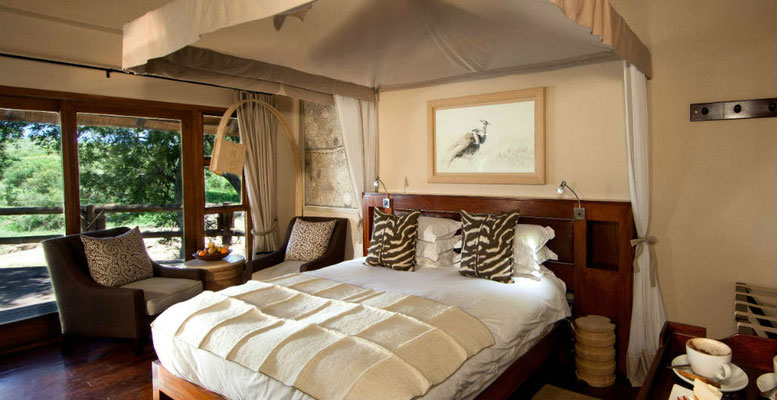 Ulusaba is Sir Richard Branson’s private game reserve in South Africa. The name Ulusaba means ‘place of little fear’, so named because the koppie, or hill, on which Rock Lodge sits provided the ancient Shangaan tribal warriors with the perfect lookout point. Ulusaba has 20 rooms and suites spread over two lodges: Rock Lodge, including the beautiful Cliff Lodge, and Safari Lodge.

Ulusaba sits entirely within the Sabi Sand Reserve near Kruger National Park, surrounded by 13,500 hectares (about 33,000 acres) of open bush. The hills of Ulusaba are spectacular as they rise above the surrounding terrain, offering a view unsurpassed anywhere else in the reserve. People visit the area for the abundant game and the variety of sightings possible – believe us, once you’ve experienced it you’ll be hooked!

Ulusaba is a family-friendly safari destination and most of our staff are Shangaan and hail from the communities that border the game reserve. Shangaans are celebrated for their dancing and singing and a rich musical heritage.

Ulusaba was voted as the number 1 resort in Africa in the Condé Nast Traveler Reader's Choice Awards in 2016 and was ranked as the third best resort in the world! In 2018, Ulusaba was named as the Best Luxury Safari Resort by Travel + Leisure India.

The first incarnation of Rock Lodge was completed in 1983, with an access road having been built in the same year. In 1994 Ulusaba was purchased by Sir Richard Branson.

Both Rock and Safari Lodges were entirely rebuilt, and have been transformed into world-class lodges. In 2008 the Treehouse Suite was built at Safari Lodge, giving guests the opportunity to get even closer to the Xikwenga Dam and watering hole, and in 2009 the Cliff Lodge Suites were completed at Rock Lodge. Spend time at Rock Lodge and you’ll be flying with the eagles, or take a walk on the wild side back down to earth at Safari Lodge.

You’re on top of the world at Rock Lodge! Survey miles of game-rich bush as you stand eight hundred feet above the wilderness.

Here the view is king and there are endless opportunities to spot the roaming wildlife, all set against a backdrop of the Drakensberg Mountains far in the distance.

There are 8 rooms at Rock Lodge, including our Master Suite, Makwela Suites, Rock Cliff rooms and the two bedroom Rock Suite, some of which have private plunge pools.

Safari Lodge fits snugly into the bush located beneath a canopy of ancient trees on the edge of a dry riverbed. The rooms provide fascinating views of the animals as they stroll past on their way to the nearby watering hole.

The rooms at Safari Lodge include a Treehouse Suite overlooking the nearby Xikwenga Dam while other rooms have their own private plunge pools. Kids over the age of 12 are welcome to stay at Safari Lodge.

At Ulusaba dining is a very important part of your stay, and the chefs work hard from morning until night to provide the freshest and tastiest meals possible. All meals and drinks are included in the rates, and with at least six opportunities per day to eat.

The internationally renowned chefs have developed numerous pan-African dishes influenced by many African cultures, flavours and spices. The recipes are constantly refreshed and consist of seasonal, local ingredients.

Whether dining under the African sky, in the Boma, on a deck or in the dining room, the menus and meals promise to be exciting, social and inspirational. All  breads and pastries are home baked daily and they also cater for private meals and special occasions.

From bush games, safari walks and cocktails by the pool, there's no shortage of things to do during the day.

There are two daily game drives at Ulusaba, one leaving early in the morning and one leaving late afternoon, each lasting around three hours. Times will vary depending on the season, but you should always keep your eyes peeled for the Big 5!

You’ll traverse over 13,500 hectares of private reserve with your dedicated Ranger and Tracker who will tailor your game drive just for you!

Fancy a dip? We’ve got two pools to choose from, our pool at Rock Lodge surrounded by stunning views or venture to Safari Lodge and take a dip after your game drive. Both are heated during the winter months.

Guests can enjoy a star gazing evening as part of their game viewing experience at our observatory in the Bush. Our rangers will teach all about the constellations you can see from points in the southern hemisphere!

The wine cellar overlooks the waterhole and dry riverbed which attract all kinds of game. We offered tailored wine tasting and have some fantastic local wines.